HomeBlog Please Believe in Yourself 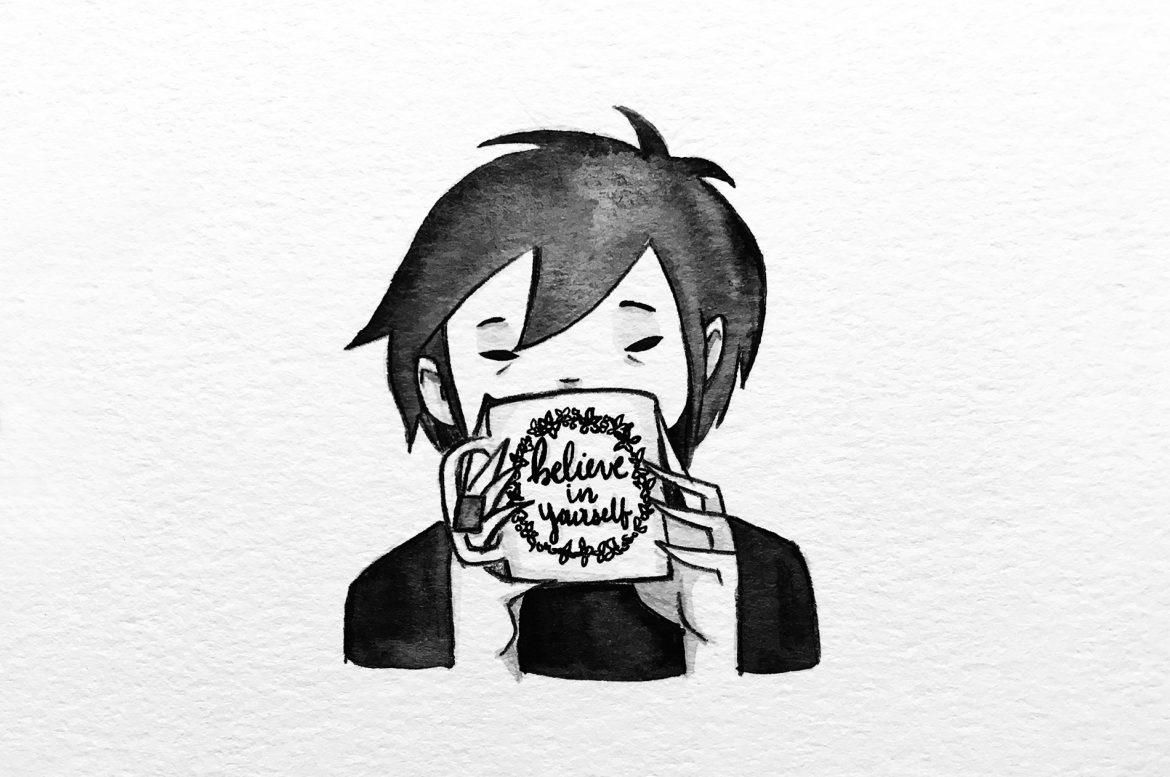 I opened my present from my friend Isabelle Adrid weeks before Christmas morning. Like a few hours after she gave it to me. Literally the second I got home last Thursday.

It was a mug with a floral wreath surrounding the words believe in yourself.

How fitting. “Believe in yourself” is something a lot of people have been telling me to do for years now. My family. My boyfriend. My friends. My writing group. My therapist. It sounds so simple, but it really isn’t.

I’ve always had this problem with believing in myself and I think it goes all the way back to the first grade. I’d transferred to an all-girls school from co-ed, and I didn’t realize it then, but everything was so different from the world I grew up in. I suddenly had a school uniform, textbooks, homework–things I absolutely didn’t have to deal with in kindergarten. The realization actually struck me just a few months ago when my 3-year-old niece Isla started going to pre-school, and she had textbooks. And homework. I didn’t have any of that in my day (for one thing, she doesn’t go to the same school I did). I’d just hop into the school bus, play with beads, draw and color, memorize the different continents and the biological parts of a fish and a bird, solve basic math, practice writing my name, eat spaghetti, and hop back into the school bus. None of that textbook nonsense. Absolutely no school uniforms (even the grade school and high school kids were allowed to wear whatever). And most importantly–no homework. That’s why when I discovered getting a Gold and Silver award for high grades was a thing, I was totally lost. I remember sitting in the patio with my classmates when our teacher Ms. Sergio gave out the certificates, and I whispered to the girl next me, “Do I get one too?” But I didn’t. Because my grades weren’t high enough. But I did extremely well in music and art, a feat my teacher didn’t really cheer me on for.

Don’t get me wrong. I have an extremely supportive family who’ve known from the get-go where my interests are. Back then, I wanted to be a marine biologist so I could save sharks and they helped me visualize my future life working at the Monterey Bay Aquarium in California. My parents even took me there when I was 6-years-old. Then I declared that I wanted to write books and be an artist. I got all the right materials to get me started, studied the sacred art of manga, and watched every single TV show I could (on weekends). Later on, I wanted to be a musician; my dad got me every single instrument I asked for. I went from piano to drums to guitar to violin to even voice lessons. (I honestly think the voice lessons didn’t work. My teacher kept falling asleep during our sessions). I wanted to be so many things. And no matter what, I’d always been inclined to the arts. As I grew older in that all-girls school, I never got that same support from my teachers there. Sure, my classmates were aware of my skills, but a lot of them were mean to me just because I wasn’t as smart as them. They’d groan when I was put in the same group as them. And it even came to a point where they banished me and I had to do the group project solo. Hell, I even had a classmate flick at her test paper as if she were getting dirt out of it simply because I touched it. Girls are goddamn mean.

I know I shouldn’t have been writing stories or doodling in class, but what could I do then? My hands needed to do something. My mind was running so fast with fantastical ideas, I had to jot them all down in fear I’d lose them. This went on until I turned 14, when I was in my first year of high school. We have this thing at our school where we have guidance counselors (who were actually just teachers) we called tutors who’d individually talk to us about how we’re doing at school, ask how we were at home, blah, blah, blah. The day my tutor Ms. Santos called me out of class for our chat, I was relieved at first that I wouldn’t have to sit through another algebra lesson, until she showed me my grades. I was failing. And she told me that I was under probation. If my grades didn’t pick up, I’d have to repeat first year or transfer schools.

“You’re so stupid,” she told me. And that stuck with me for years. To think she was the art teacher. She knew how much I loved her class. How well I was doing in my creative extra-curricular activities. But no. None of that mattered, because I wasn’t doing well in the “important classes” like Math and Filipino. I wish I’d told my parents sooner that she’d called me stupid, but I didn’t. I just accepted it. She talked to them, and my parents set me up for a day with a psychologist. I didn’t really know what I was doing there, just that I had to answer questions, pick colors, draw pictures, and wait a lot. At the end of it all, I found out that I had the intelligence of a 13.5-year-old, but the creativity of a 17-year-old. He recommended Brent would be a good place for me, but we didn’t have the money for me to attend international school. So I went to a school where everything discussed from sophomore year to my senior year was everything I took up during my first year of high school. It was then I became number two in class without having to exert so much effort. I even made it as Vice President of the student council and Prom Princess, things I never imagined I’d be back at my old school. I was finally confident. At least, I thought I was. I didn’t realize it back then, but my boyfriend at the time was emotionally abusive. I wouldn’t have guessed. I was a dumb teenager. I didn’t know his jokes were damaging. He’d call me weak. He’d get pissed if I didn’t wax my knuckles. He didn’t like it when I hung out with other people. And even if I knew my drawing skills were so much better than his, he’d say he was better. It was a really toxic relationship my friends didn’t want me to end because “sayang yung time,” that I shouldn’t throw away the time I spent on him.

Eventually I got out of that mess, went to college, and headed straight to work from there. I moved on. Though my depression and low self-esteem still get in the way, I’m in a much better place now. I’m working at a job I’d always dreamed of since I was 12. My family is more solid than ever. I have the most amazing boyfriend who supports my dreams. I have a literary agent who’s got my back. I have a therapist whose goal is to help me wash away the self-doubt ingrained in me. And I’ve found these brilliant new friends who believe in the things I can do. It’s because of them I finally started making stickers. I know stickers aren’t that huge of a deal, but it’s a good start. These people all see the things I feel I can’t do, but actually could if I just had a little more confidence in myself.

Even as I write this, my friend Gail Villanueva is bugging me to get my butt on this graphic novel thing. It’s always been a daunting project to me, but maybe I can do it. Maybe I will do it.

This next book I’m working on, I’m gonna get that shit done.

Selling stickers, tote bags, notebooks, and prints? Let me know when the next art fair is.

TL;DR: Don’t let that horrible teacher, those mean classmates, or that uncaring ex hold you back. Please believe in yourself. You got this.

Thanks for the mug, Isabelle!