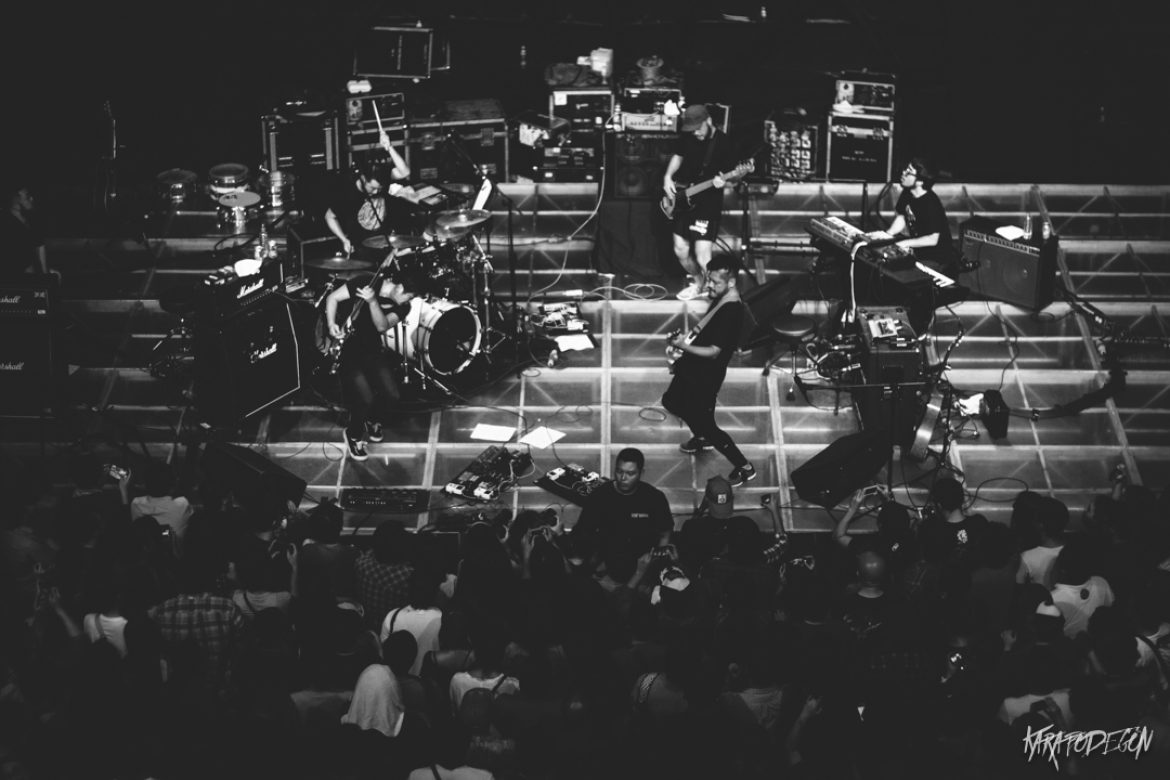 Last Sunday (Nov. 27), the day began with a silent calmness as toe fans appeared at the doors of Samsung Hall in SM Aura as early as noon, hoping to score tickets to see the Japanese post-rock act for their third time in Manila. Unfortunately for those who didn’t make the effort to buy their tickets earlier, organizers had to turn down the number of hopefuls at the door. “Sorry, it’s sold out,” security had to tell fans. Some decided to stay behind to at least get a glimpse of the instrumental quartet through the glass doors, and the persistent ones were able to steal a few photos of the band just as they entered the hall for sound check that afternoon.

Behind the mixing board was Jay Eigenmann, who was beyond ecstatic to be back in Manila. Now based in New York, Eigenmann has been working with toe over the past year as their touring FOH engineer outside Japan. “It’s not really very often that you get to work with people you look up to,” he says. “They’re the sweetest guys. They’re such talented musicians. It really makes my job easy. They’re really amazing to be on the road with and they enjoy the same things I do, so we get along. We like to eat, see the sights, and put on good shows.” He admits the language barrier makes things a bit of a challenge, but they find ways to communicate, and it was evident in how smoothly sound check went.

Shortly after warming up the stage (at precisely 7PM, verifying the realness of “Japanese time”), guitarist Takaaki Mino and bassist Satoshi Yamane blended in with the crowd outside to grab a smoke, while drummer Takashi Kashikura and guitarist Hirokazu Yamazaki took a break in their dressing room. As fans were ushered into the venue by batches, a playlist of Terno Recordings artists and various Japanese songs served as the backdrop for waiting time, unknown to many that a new Up Dharma Down song was playing overhead. “The song’s called ‘Sigurado,’ but it isn’t done yet,” says guitarist Carlos Tañada, who sat near the tech booth, to a fan who noticed the song.

As the music faded and switched up to Salt-N-Pepa’s “Shoop,” toe made their entrance onstage to the unlikely welcoming song. At this point, the massive line that serpentined to the back of Samsung Hall had filled the space. Kicking off their set with “A Desert of Human” from their latest record Hear You, toe opened with relaxed melodies and full concentration.

Last Sunday’s show held a more intimate setting compared to toe’s previous visits to Manila in 2012 and 2013. When they first came, it was during the rise of math rock bands in the underground scene, but they were able to go left field in an already left field genre. This time was different; they were able to go beyond what they’re already know for and reimagine a performance that captures its audience from start to finish.

Shifting from organic to electric tones as they progressed through their set, toe remained voiceless until Yamazaki turned to the mic to thank the audience in broken English. The crowd remained restless, pairing their energy levels with Mino and Yamazaki as they stood with electric guitars and thrashed for the rest of their set. The calmness that opened the evening had vanished, and the men onstage completely lost themselves in their music.

toe with Terno Recordings production crew after the show.

The audience left Samsung Hall full and satisfied, as toe gathered themselves for dinner that evening. The rest of their short tour takes them to Kuala Lumpur, Shanghai, Beijing, and Hong Kong, and it looks like it wouldn’t be long until they return to Philippine shores again.