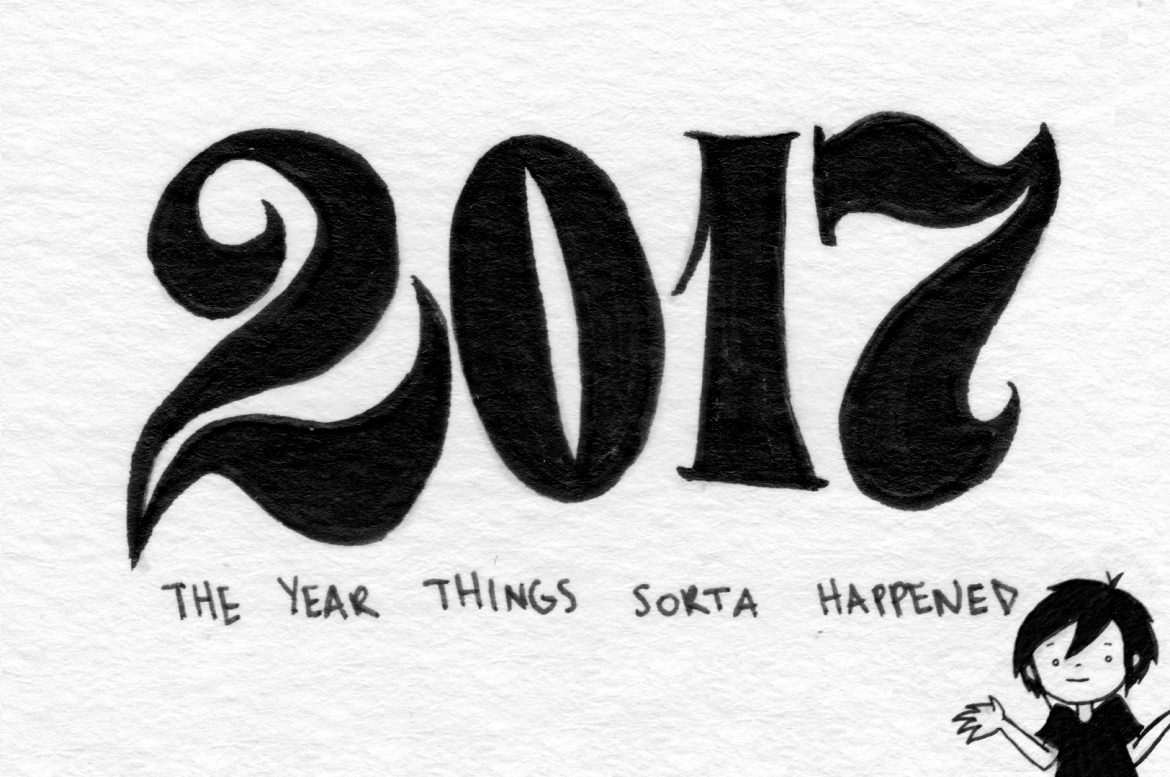 I’m just not so sure about 2017. It was an okay year. Definitely no comparison to how much 2016 sucked, but it wasn’t that great either. I guess you can say it’s part of that prelude to the elixir I mentioned, back when 2016 was still saying bye. It’s still not our Resurrection. We’re still being tested one last time (maybe it’s a test of patience?) for whatever lies ahead.

Just like last year, I’d like to take a look back at what made 2017 the year things sorta happened. From going on submission for my debut novel, working on commission pieces for some ～☆dream☆～ clients, to confronting my mental health issues for real, it’s safe to say that the past year was all about personal growth. Being on submission has taught me how to be patient and I’ve since made some new authorly friends on that road (thanks, Twitter). Taking on commission requests from not just new, but also dream clients made me realize the value of my illustrations. And most importantly, facing my mental demons was the biggest change for me.

Here are events that made 2017 the good kind of okay that it is:

My life as an agented author officially kickstarted

My life as an author went into hyper-speed and I carried on with revisions for my debut novel. My book then went into submission in the later half of the year, in search of a good home.

Speaking of kickstarting my life as an agented writer, the best way to kill impatience is to write the next damn thing. It’s the only way to win the waiting game, really. You’re totally hands-off when you go on sub. I actually started conceptualizing this WIP toward the end of last year, but it didn’t feel as solid until after replotting a few times. I have a better sense of where I want this story to go now. It’s really just a matter of finishing the first draft and handing it over to my agent.

Went to Singapore twice this year

The first time I went to Singapore this year was to catch Periphery live in concert. I’ve seen these guys live thrice and catching up with them is like catching up with five big brothers who you don’t get to see too often ’cause they’re out there living their dreams. I also had a bit of a last minute emo night when a friend in Singapore gave me a ticket to see Yellowcard at their Farewell Tour. I spent a solid week in the Lion City and had a ton of fun exploring my way.

The second time I went this year was to surprise my older brother George on his 40th birthday. It was a total YOLO weekend for my family (we had an overnight stay in Pagsanjan the day before we flew out), and my brother had no idea! It was crazy fun!

Started psychotherapy and got on antidepressants and mood stabilizers

My battle with depression has been going on for as long as I can remember. This year, I finally confronted it and started seeing a psychiatrist. She put me on antidepressants and mood stabilizers, and they’re doing wonders for me. But I was doing all this behind my parents’ back, worried about what they’d say, but I had to tell them eventually. I opened up to my stepmom about it first and she told me she had a feeling about my condition. She then set me up for an appointment with a psychiatrist friend of hers for a second opinion, and that’s when my dad found out about it. We’ve had “the talk” about my depression, and now I feel a lot more free.

I’ve had “Get a Platinum Trophy” on my bucket list for the longest time! And this year, I got 3 of them on Life is Strange, Tekken 7, and Assassin’s Creed: Origins.

For a while back there, I stopped painting. My life became black & white for a while, until I got on medication for my brain problems. It all started with koi and goldfish. From there, I started producing more colored work and even traditional 2D animation. (Sho and I built a lightbox together!) And although I’m off to a slow start, I’m finally getting into making stickers. Wait for ’em. They’re gonna be awesome!

But of course, there’s absolutely nothing wrong with black & white art. I honestly think I work best with it. I actually went back to black & white, rediscovering my love for sumi ink, and continued from there with more details in my work. Check out my Instagram. It’s hella updated. More updated than my site, to be honest. Whoops.

Hung out with some authors I met on Twitter

Who says you can’t be friends with people you meet online? To be honest, Gail and Isabelle turned out to be some of the best people I met this year. We went on bookish hangs, including this meet and greet with Pierce Brown, a failed attempt at attending MIBF 2017, and got together with two other authors Rin and Hazel. We are now a group of five authors on different stages in our authorly careers.

Did more commission work than I’ve done before

This year brought me some major commission work (some of which I can’t reveal just yet). And when I say major, I’m talking about ONE OF MY FAVORITE METAL BANDS EVER. You’ll find out which band that is when it comes out. On top of that, a major publishing house approached me to license one of my illustrations for a book they’re putting out in 2018. I can’t say anything else about it either, but I’ll be sure to make an announcement soon.

I didn’t think I would, but I got a PS4 Pro in Singapore. I didn’t realize how heavy it would be until I lugged it around the mall and carried it all the way to my brother’s flat. When I brought it home to Manila, it immediately found its own spot in my bedroom. I named him Protacio.

Months later, I promised myself I’d only get a Nintendo Switch when they had more games, but there was this dude who was selling one at such a low price (with Mario Kart 8 and accessories), I couldn’t refuse. I named her Soo (short for Switch or Soo Young).

Now, with these gaming consoles, I needed to upgrade my TV (because goddammit, I couldn’t read the tiny font on Assassin’s Creed Origins). So I’ve set up my room with the ultimate entertainment system, featuring a 49″ LG 4K TV completely surrounded by a collection of Legend of Zelda Amiibo. From there, I felt this need to fix up my room (especially since I work here), so I did a lot of rearranging, bought shelves, and currently have my eyes on a drafting table to work on. If you wanna help fund that table, please send a commission request.