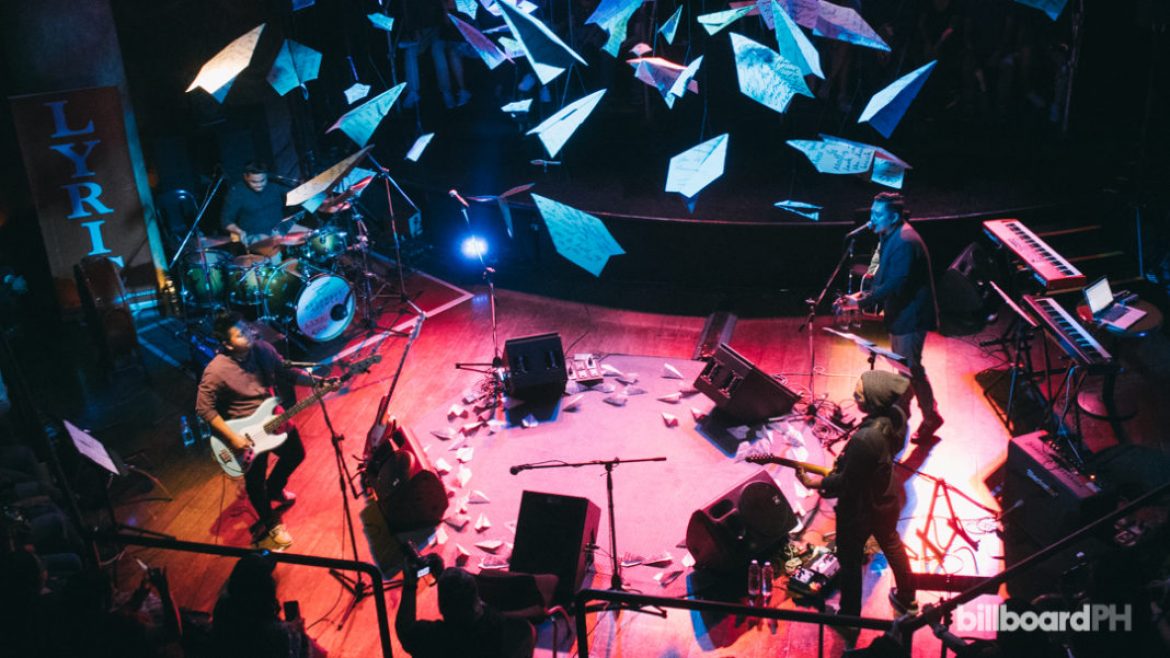 December Avenue is not your typical band. After releasing their eponymous debut album in February, they completely went left field and kept things hush for a good eight months — an unusual move for a band that spent almost a decade working on a record. But in October, fans were surprised to see the band’s request to save Dec. 8th on their calendars, breaking their silence at last, for their first major concert. Within days, tickets to the show were sold out, so a second night opened for Dec. 12th. And it also sold out.

The night has finally come and December Avenue devotees are trickling into Teatrino, Greenhills, passing a projection of the band’s visual of “Forever,” just outside the doors of the venue. Beyond the merch booth and through the velvet curtain, they find that the band’s setup has been placed on the floor beneath a display of paper airplanes, and that VIP ticket holders are treated to watching from bleachers placed onstage.

Shortly past 8:40 PM, house lights are shut off, allowing the band to make their silent entrance. Guitarist Jem Manuel electrifies the audience, taking the lead as his bandmates join in to dive into their opening song “I’ll Be Watching You.” The lights transition from warm to cool as December Avenue progress through their set with “Candles” and dedicating “Ears & Rhymes” to the ebullient crowd. Vocalist Zel Bautista introduces the band — Jet Danao on drums, Don Gregorio on bass, and sessionists Adriane Macalipay and Gelo Cruz on keys. The soft-spoken Manuel quickly pulls the mic to his mouth and quips, “Kilala n’yo na ako,” triggering the audience to laugh until the band strike through the rest of their set.

After debuting their new song “Kahit ‘Di Mo Alam,” Danao starts a soothing beat on the drums, playing as a backdrop to Bautista’s introduction for “Eroplanong Papel.” He mentions how special it is to the band and how it speaks to them as their journey together since college. After they dedicate it to their family and friends who supported them (even by lending them money to commute to shows), the voices of the audience erupt with Bautista all throughout the song.

“One of our major influences in music…” says Bautista, “is Urbandub.” He recalls December Avenue’s days with Sonic Boom Philippines with the loving memory of how it was because of them that they were able to meet their heroes, whom they acknowledge as one of the best bands in the local music scene. They rip through a cover of “The Fight is Over” from Urbandub’s fourth studio record Under Southern Lights, when frontman Gab Alipe and guitarist John Dinopol make their entrance at the chorus. Alipe plays hypeman, raising his hands for the crowd to sing louder.

“It is an honor to share the stage with these guys,” Alipe says, telling the audience that they don’t need to spend such a large sum of money to hear quality music, before slipping into their next song, the Urbandub classic “A New Tattoo.”

The evening’s next guest, Clara Benin takes Alipe’s place with her acoustic guitar, continuing their homage to Urbandub with a cover of “Evidence” that turns into a medley with Up Dharma Down’s “Oo.” Benin then steals the stage with a song called “Wine,” while December Avenue take a breather.

Although they started the night bottled in a mix of shyness and nervousness, December Avenue are able to break out of it, letting their jokes and music take over through their spirited performance. Just before closing their set, Manuel says to the packed Teatrino, “Diba magmomore kayo?” And in response, the exuberant crowd scream as the band carries on with “Time to Go.” The theater goes dark to moment the song ends, but just as quickly, December Avenue return for their encore with “Paskong Alaala” and “Sleep Tonight,” ending the night with the beautiful voices of the audience singing along with their promise, “I’ll never go.”

Even with their unconventional methods that kept them quiet over the past ten months, December Avenue have surely set a benchmark tonight — not just for the local music scene, but also for themselves. It’s only evident that Dec. 8th is just the beginning. There will be more of December Avenue in the days to come, but first, they must wow their second sold out show on the 12th, and with the support of their loyal fans, it shouldn’t be so hard.