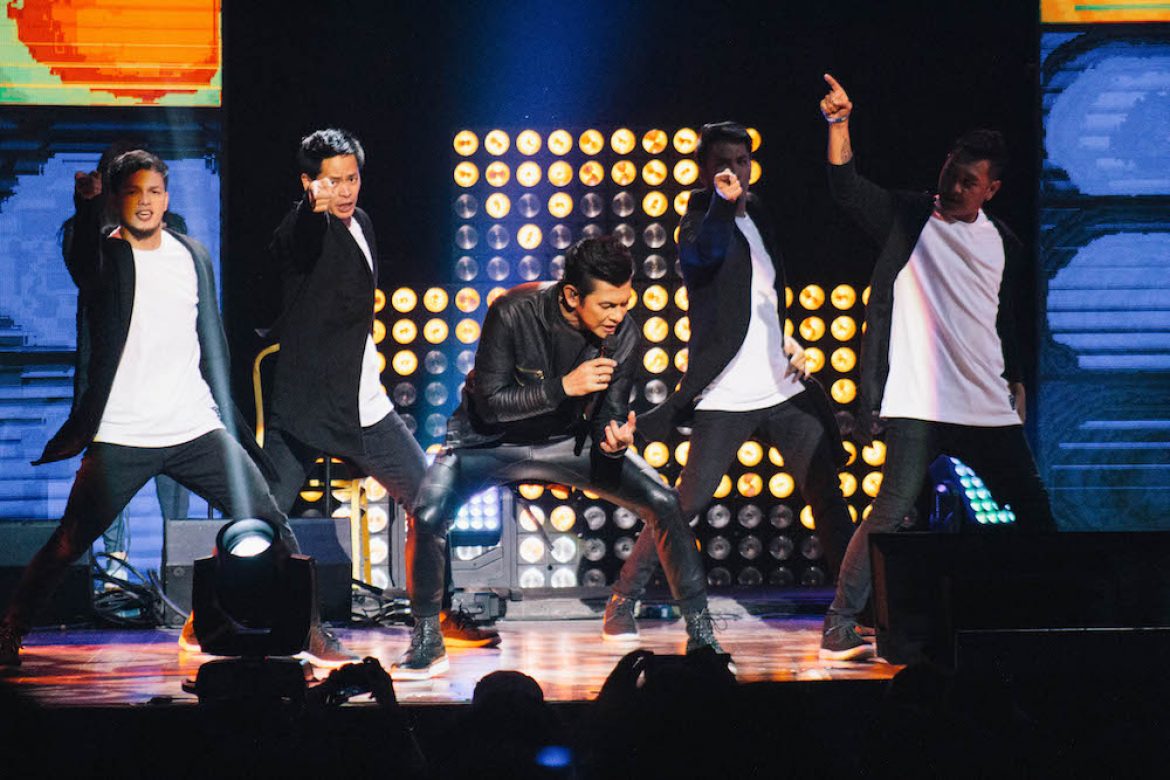 You’ve never truly seen a real show until you witness Gary Valenciano live in concert. Right from singing along to his top hits, watching the fantastic choreography, and marveling at the overall production value, it is truly at a Gary V show where you realize how much more Filipino talent has to offer. And now, after thirty years in the business, it’s time for Mr. Pure Energy to pay it forward and give the spotlight to up-and-coming singers in line to represent the Philippines in the world stage with Gary V Presents.

On Friday night, an intergenerational crowd made their way through the rain and filled the KIA Theater in Quezon City. Opening the night was Alopecia Awareness Advocate Abby Asistio, backed by guitarist John Apura. Having warmed the hearts of the audience with her original song “Beautiful,” Asistio left the stage as Gary Valenciano took over in the most candid manner. He casually walked from the side of the stage, introducing the show before the red velvet curtain parted from the middle to show a digital city backdrop of LED screens, a variant of his successful 2012 concert series On Higher Ground. Despite the little technical difficulty at the start involving the center screen, Valenciano pulled through with his charming smile and excellent impromptu skills.

Gary V Presents featured a cast of fresh and incredibly talented singers chosen by Gary V himself along with concert director, his son Paolo, who wanted to “present a whole bunch of kick ass singers who are not known or are ignored by mainstream media, and give them a chance to be heard in the Gary V level.”

“No other artist can really be able to promote up-and-coming artists,” says Paolo. “I think the only other guy who can do that is Ryan Cayabyab and I felt that Gary V should already be on that level—passing forward, giving others a chance.” And an incredible chance was what they gave to Jimmy Marquez, Janice Javier, Carla Guevara Laforteza, RJ dela Fuente, Katrina Velarde, Mitoy Yonting, Lara Maigue, Allan Silonga, and Gary’s daughter Kiana Valenciano.

There isn’t a Gary V show that lasts any less than two hours. This is simply because the man loves to tell stories as much as he loves to sing. The only difference this time was that he focused on the guest singers rather than himself that night, introducing each one with the attention they deserved and showcasing the talents they possess. One of the standout numbers was the scat singing battle between Valenciano and Katrina Velarde (a.k.a Suklay Diva) on a cover of Al Jarreau’s “Spain.”

Valenciano strapped on an unusual MIDI drum machine to take the show to a different direction. He called on folk singer/songwriter Bullet Dumas to take the spotlight for “Babalik Ka Rin,” an anthem popular amongst overseas Filipino workers. It was with Dumas’s performance where majority of the audience was wowed by his obvious passion for music.

“They deserve to be heard again and again and again…” Valenciano proudly said after the stunning performances of The Voice Philippines Season 1 finalist Janice Javier and winner Mitoy Yonting. “These are artists that are not meant to be forgotten.”

Confident in his guest cast, Valenciano prompted a Michael Jackson battle between boys and girls to close the show, but the hungry audience wanted more. Waiting time for an encore was quick, and everyone was treated to a spectacular medley of Valenciano’s favorite Earth, Wind & Fire songs and the entire cast together on “Galing ng Filipino,” an excellent choice of an ending to present the new blood of Filipino talents to the world.